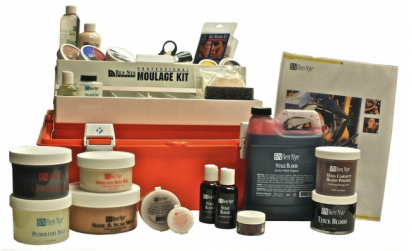 Cascadia Moulage provides 'Trauma Simulation' for emergency response trainings throughout the Portland Metro area, as well as regional, multi-agencies mass training events. Using theatrical makeup to simulate serious injuries provides much needed 'realism' for the most effective training experience.
Cascadia Moulage began as a UASI-funded project, initiated by Alice Busch and Lucie Drum in 2003.  Initially a very small project, Alice & Lucie taught moulage techniques to groups of volunteers, and over the years Cascadia Moulage has grown to include a resource of over 75 trained moulage artists- most of whom have a background in medical or emergency response, and know how that added level of realism during training can dramatically increase an emergency responder's focus and effectiveness in a real life situations.
During 2015, Cascadia Moulage participated in over 20 drills and exercises, ranging from small, local CERT final exercises to large multi-agency disaster drills, like Operation Minuteman at Camp Rilea. We provided support for Emergency Department Physician trainings at OHSU in Portland,  and Sacred Heart Hospital in Eugene. We also provided  moulage in general community exercises at three area high schools, several Portland Community College campuses, and SERV-OR and MRC trainings, in addition to numerous Portland NET exercises. We've been doubling our event outreach every year since 2013.
Moulage is not for the weak of heart! It's a demanding skill set with early, long hours in some rather primitive settings. But our 'victims' seem to really enjoy the creativity, and the emergency trainees can't say enough about how much they benefit from learning to manage 'real life' scenarios.